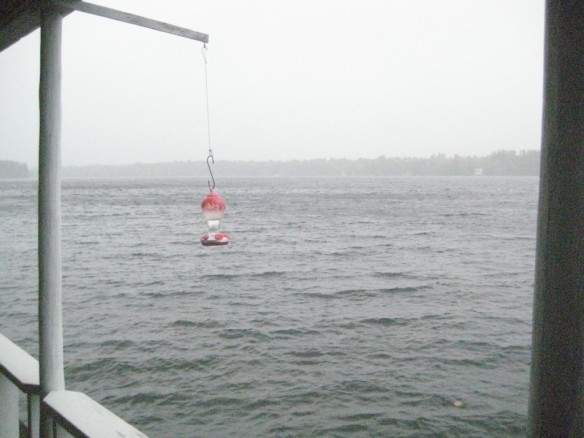 It’s another rainy day in New England and so we took a drive to Freeport where there was a “huge tent sale” advertised and as it was to support a foundation, we thought it was a good one to support. Well, not so much “huge” as “pretty big”. I was thinking yarn and needles and maybe even a spinning wheel (not that I would know what to do with it) or an armoire for the bathroom. Yeah, well, no. But we did buy a $10 canoe paddle (we don’t own a canoe).

While in Freeport, I had to stop for a couple of gifts at L. L. Bean and then while N. went to look at a used canoe … I got dropped off in Bath. Home to Halcyon Yarns. I’ve been there before and loved wandering the store. Halcyon has fiber and just about anything you can imagine for spinning, felting, weaving, knitting, crochet, etc. I have yet to leave the store without saying, “Someday, I want to learn to …” (weave, spin …) I loved a shrug-cowl-thingy that they had as a sample and if they’d had three or four skeins of the yarn in the bargain bin, I’d have bought that too … it’s from the book Cowl Girls which is loaded with cowls that I would love to knit (if I just had more hours in the day!)

Today, after a couple hours of browsing, I left with a big shopping bag full of yarn. 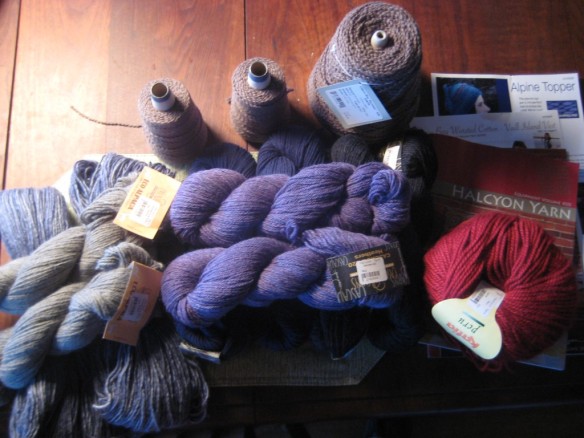 Cotton (on a cone!) for a vest in a really pretty khaki with a browny-green tint for moi! – and several other gift items that I want to make for birthdays and Christmas. (Yes, I’m already thinking ahead to Christmas!) A couple of pairs of worsted weight socks, alpaca fingerless gloves, mittens and a couple of patterns. The best part is that with the exception of the yarn for my vest and the aaforementioned pair of mittens that I’ve been wanting to knit (you’ve seen the Bella mittens from Ravelry?), all of the yarn was half price or just about half price. So, when the total was rung up, I was so excited! Such a deal!

All knitters know that this is an expensive habit. Today I celebrated clearance bins!

When we got just a little bit lost on the way back home, the second (or was it third?) dead end we came upon, we decided to stop to let the dogs out to do their business and saw a bird that I don’t think I’ve ever seen

before … I consulted the bird book that lives in the car and found that it was a bobolink. They are really pretty little birds and we enjoyed watching a couple of males and a female fly around this lovely field that we “found”. Thanks for the photo to the Cornell Lab of Ornithology website … if you like birds, you’ll love this site!

After that, we decided to follow Ethel’s (our GPS) directions and we actually made it home.