Boathouse ... Our Flag Flies Every Day

Ned painted the flag on the side of our boathouse several years ago. Some days we go about our business without so much as a glance. Days like today, however, I look at it and feel so grateful to my father and the other Veterans (and soldiers) who have fought and are fighting for our freedom.

My father fought on a battleship in World War II. He was a gunnery soldier and shared stories about living on the ship where they had a pet monkey and the men dressed in drag to perform plays for fun. Dad didn’t like monkeys (they were dirty) and he never ate another hotdog, having had them “up to here” during his service.

The captain of Dad’s ship was a “drunkard” and I have pages and pages in his handwriting of charges that dad would have filed against the man. We may never know if any of those charges of abuse, drunk and disorderly, etc. were officially filed or if my dad just wrote them down for himself. (He did become a lawyer, after all!) Somewhere I have a map of his tour of the South Pacific that he made and I’m sorry to have given away or sold his uniforms and the “treasures” that he brought back with him. Only now do I recognize their value. Family heirlooms today that I would be grateful to hold and preserve for my family.

Many of my Rockwell forebears were also soldiers. Bits and pieces of historical documents  are in my safe-keeping and one day I’ll get them scanned and shared in another blog. One a soldier in the Revolutionary War who was called to duty in the summer of 1776 … check this out! From the State of Connecticut 1907. I believe that Julia L. Rockwell was my grandfather’s sister or his mother making the soldier my great or great-great-grandfather … though I don’t have the genealogy to confirm that here! (I will confirm at a later date.) 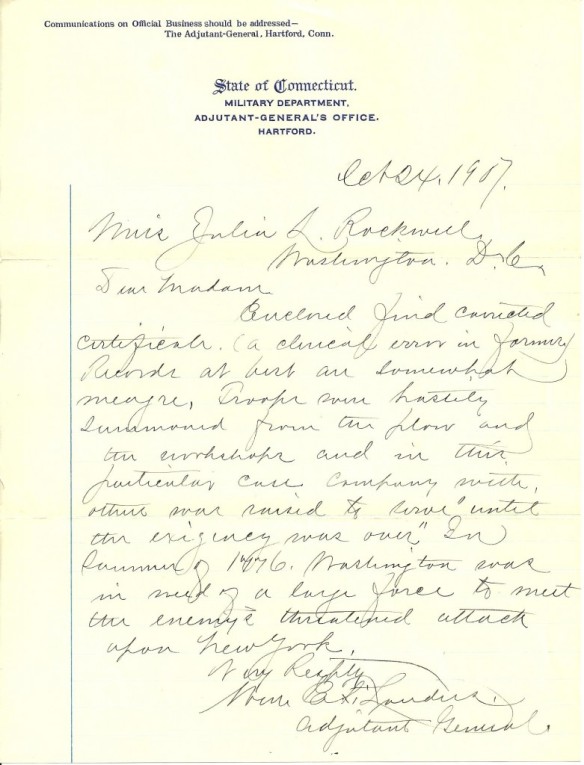 What!? You can’t read the old handwriting?! 🙂 I had to work at it, but here is what I think it says:

Enclosed find corrected certificate. (a clerical error in former) Records at best are somewhat meagre, Troops were hastily summoned from the floors and the workshops and in this particular case company with, other was raised to serve “until the exigency was over” In summer of 1776. Washington was in need of a large force to meet the enemy’s threatened attack upon New York.

Suffice it to say that I am proud to be American today – and every day. I am grateful to my family members who have answered the call. My father, my great- or great-great-grandfather (?), Bud King (who is the Grand Marshal of the Oakland, ME parade today … he’s the oldest living veteran in Oakland) and Bethany, Jordan, and all the rest who have served or are serving  … Thank you for your service!