I had a message from a friend in Ohio requesting a chemo hat to be made for a friend’s three year old daughter who has cancer. As I’ve said before, maybe not here in the blog, the words cancer and child should never be seen in the same sentence.

When a special friend asks and because my three children are healthy, I agreed to put aside my personal knitting and make a gift for a little girl who faces some yucky days. I needed to know her name and her favorite color. I had some fun purple (Haley’s favorite color) yarn in my stash and I went over to Ravelry to look for patterns.

I was originally thinking about a striped hat that I’ve made before. It’s a great hat. I’ve made a couple of them to donate for fund-raisers or whatever. Although, this old girl forgot, it seems, to take any photographs of them. Oops!

Anyway, I was looking around and found a lot of cute hats … and then I found THE hat.

I knew it was perfect (and I had just put aside some sparkly gold specialty yarn that I have had for ages to see if someone in my knitting group wanted to use it.) So, I pulled out the gold yarn and my stashed purple Cascade 220 and I got started.

The hat is called “Princess Crown” and can be found, free, on Ravelry. It’s one of many adorable patterns in Allison Stewart-Guinee’s Fairytale Knits book. And it was just perfect. I knew it in my heart immediately. What little girl doesn’t love to wear a crown? 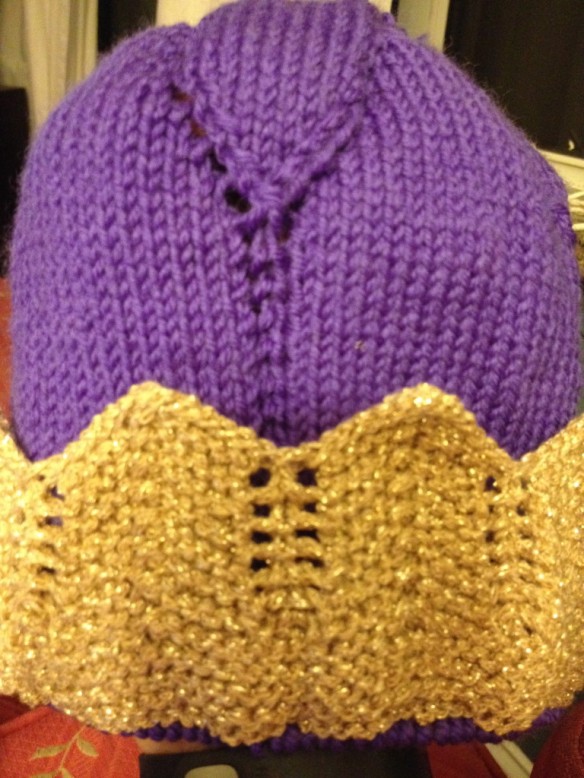 The hat knitted up very easily and has just a touch of lacey-ness in the body of the hat which carries down the hat making it look as if it’s a real crown. The golden crown part is knit up separately on circular needles and then stitched together with the hat. Once together, the band is knit and it even has a pretty picot edge stitched right in.

Because the format on the Amazon site is supposed to be laid out as a book, it can be a little bit confusing to follow. Just beware! I did get lost at one point and had to frog and re-knit a couple of rows. If you can follow the format of the pattern, though, the pattern is clearly written and simple to knit. It looks like you’re an expert, too! 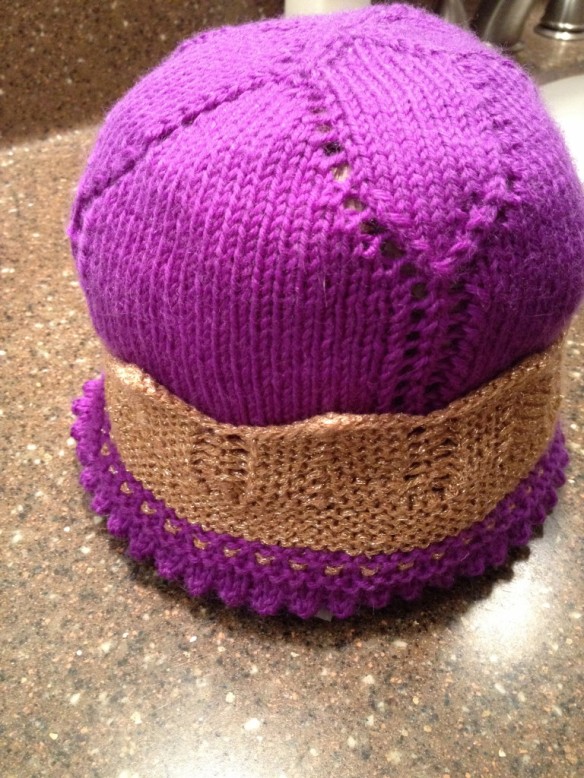 Wet blocking so the hat has some shape!

I have wet blocked the hat and used a large handful of plastic grocery bags as a form to have the purple “hat” part block out. I can’t wait for it to dry so I can get it into the mail! I hope Haley is going to love it and that it brings her smiles on the crummy days when she doesn’t feel well. There’s lots of love in that little hat and it’s all heading to Ohio and Haley!