You know (don’t you?) that I live on a beautiful lake in Central Maine. We are very fortunate to have a thriving loon population despite the crazy boaters that have caused nests to fail (one year we had two lost eggs on the same nest).

This year, the loon pair nearest to our house had two chicks. They nested on a nesting platform that has been built by our lake association (and is in need of some work). Loons don’t walk on land well. Their legs are located farther back on their bodies than other waterfoul and their bones aren’t hollow like other birds. Loons sit low in the water and are very heavy so nesting is a challenge for them. Regardless, our pair had two eggs and hatched two chicks. We watch them like hawks … and I’m not kidding about that at all. Hawks and eagles and other animals prey on baby loons. They become “my” chicks every year. My neighbors feel the same way.

This year, we have all enjoyed watching the twins with their parents until there was only one twin. My heart was broken that we seemed to have lost one of our sweet chicks. But our local lake tour guy, and a friend of mine who sits on the lake association board of trustees with me, texted me about the “missing” chick that he hadn’t seen for five days. He reached out to another board member who just happens to be our resident nature guy and loon expert. Here’s the skinny …

Our loon is healthy and well and living in pseudo-captivity for the next few weeks in Massachusetts. And this is the gist of what I’ve learned. There is an organization here in Maine called Biodiversity Research Institute and they’re authorized to move loons (after they’re big enough to feed themselves but before they are able to fly) to Massachusetts to translocate loons in an effort to restore the common loon to an area where they’d disappeared. This is what’s happening to our loon. He or she is helping the loon population to grow in another place. And the BRI program has been very successful over the past several years. This is loon conservation at it’s finest! (Read about the success of the program here!)

More good news … Our remaining loon (and the loon that was translocated) has a significantly better chance of surviving to adulthood. Feeding two chicks is a huge job for the adults. Feeding one chick is a big job. This way, since loons don’t count very well, the adults will be feeding their remaining chick well and they’ll all three be healthier and more prepared calorically for their flight in the near future to the coast. Our loons will winter over in the harbors off the coast of Maine and then in the spring after ice out, our adult pair will return to the lake. The young chick will remain on the ocean for a couple of years before flying “back home” to find a mate. The translocated chick will be fed minnows for a few more weeks and when he/she is ready, will be released on a lake in Massachusetts. That baby loon will fly to the coast from it’s new home in MA. Baby loons navigate “home” based on their first flight.

I am delighted to report that our baby loon is going to be a positive helper in the future wellbeing of the common loon. This kind of program has also helped to bring back Ospreys, Eagles, and other animals. There is currently a program that is working to bring turkeys from Maine to Texas where there used to be a lot of them. (We have tons of them in Maine!)

There you have it! I was so excited that I needed to share. 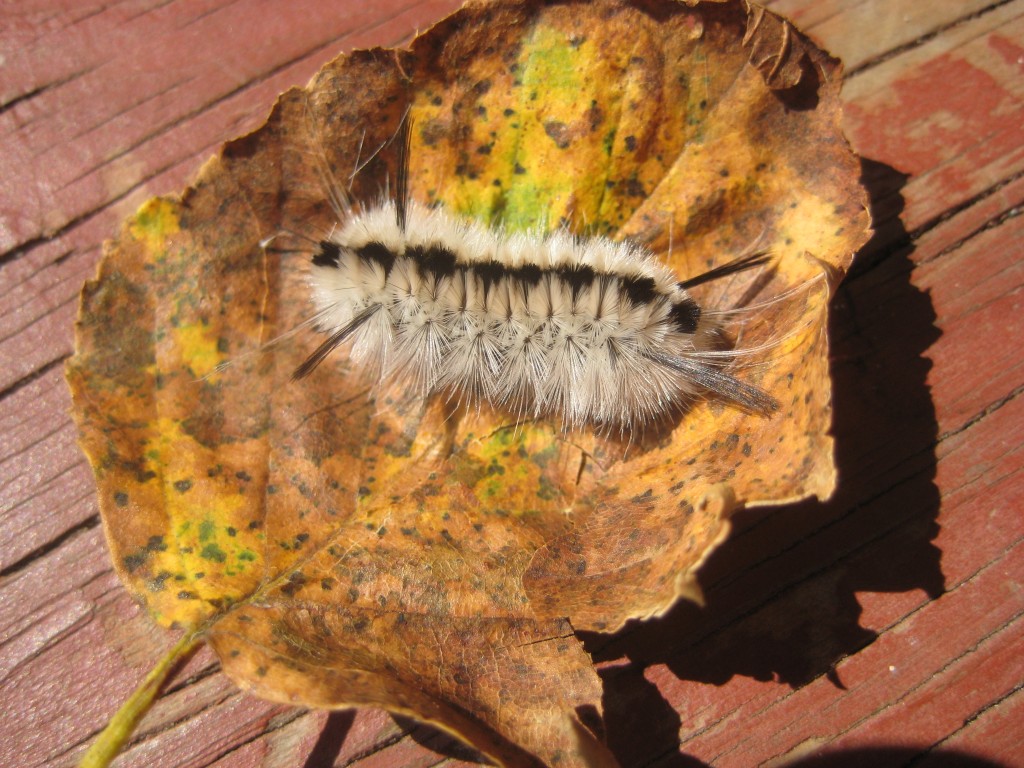 Fuzzy Caterpillar - It Must be Fall!

This morning my nose was freezing cold when I woke up. I was even cold last night under a down comforter. Good sleeping weather.

The main reason, though, that I love it here is the nature. When I was up reading (and sniffling) last night, I could hear the loons calling. I love that sound – and somehow it makes you feel like you’re not alone.

This morning, I was sitting in the sun on the porch and watched a king fisher catch two fish … well, I didn’t exactly watch the darned bird – it was way to speedy for me! I saw it flash back up to the roof of the front porch after I heard the splash (twice!) and there was definitely something in it’s beak. They have a unique call so I knew it was on the roof above me but even as I watched, it moved more quickly than my eyes!

And last night on our cruise, we watched a couple of flocks of sea gulls over the lake. I’ve seen them flock over the ocean but never on the lake … well, at least I’ve not noticed it before. They were eating bugs. I didn’t know they ate bugs. Learn something new all the time!

Right now as I type this, a loon is fishing in front of the house … the wonders of nature!

Local tomatoes, basil from our garden, Maine-made mozzarella and freshly baked baguette from the Green Spot in Waterville. Delicious!

Going to watch the lake!

We sat on the front porch tonight listening to the silence.

The rain had stopped and it felt good just to get some fresh air.

The fog was rolling across the lake and filling up the valleys between the trees on the other side. Fluffy. Thin enough to see through in some places and pea soup thick in others. There was a loon fishing – moving from the left of the house to the right of the house on three or four breaths – and a pair of Canada geese flying through the fog just above the water. Honking to each other all the way up the lake. I could sometimes see them in the foggy misty white and then they’d disappear.

The people in the big house across the lake must have arrived for the weekend and were banging open their house. It’s a mile across but when the lake is mirror smooth, you can hear everything. Even from a mile away.

And as we sat, the fog rolled closer. Obscuring the ability to differentiate between the water and the fog and the clouds in the sky.

Until a bat flew over the water and we couldn’t tell if it was one bat or two.

And now, the loons are outside calling their calls. It’s apparently mating season but we’ve missed the sounds because of the sound of the rain on the roof. Their calls are one of the reasons that I love this place so much and am grateful to be here.