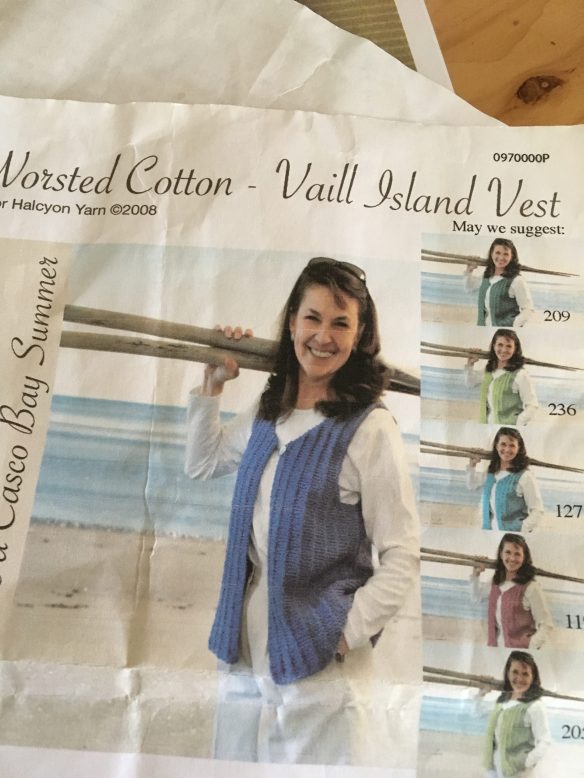 I’ve had this vest in my WIP pile (actually a pile of project bags full of future projects and projects half-done) forEVER! I love the first version of this vest so much that I’ve encouraged a couple of my knitting students to give it a try AND I cast another one for myself on back in mid-January. Yes, it’s been that long!

Every once-in-a-while I’ve pulled it out and finished a few rows and then away it goes in favor of another more current and seemingly imperative knit. Well, yesterday I took it to my knitting class with me with the thought that I didn’t even remember how much I had left to knit. I got the back finished and one of the front sides nearly finished at class and then continued late into the night … when I started to notice mistakes. (Hey! I’m usually in bed by 9 or 9:30 and last night it was after 11.) This morning I will frog back a couple of rows on the last front side and re-knit so that I can get it finished this weekend and I will be able to wear it this fall.

Vaill Island Vest designed by Gwynn Ericsson for Halcyon Yarn in 2008. This is a free pattern on Ravelry.

I really like this pattern. The repeat is simple, it’s knit bottom up in one piece (at least mostly in one piece) and I can wear it over my self-imposed work “uniform” which is almost always a pair of slacks and an oversized tunic/blouse. A wool vest will be great … as is the cotton vest (first iteration). I used Ella Rae worsted wool in a deep red colorway (it’s on my Ravelry project page). The color is really closer to the first picture. The second is to show a close-up of the stitch pattern. So close!

I found a mistake in the pattern, though, last night. The directions for the left front say that when I slip the stitches from the holder that I should have 45 stitches. Well, I had 50. That’s the number of stitches that I was told to slip onto the holder and they’ve just been sitting out there for all this time. So, having adjusted the stitch numbers, I had 50 to slip onto the needles, I bound off 8 right away (42 sts). Then I begin decreases, one every other round six times, to 36 stitches. Neck decreases total to 5+4+11=20 and now I have 16 stitches which is the correct number in the pattern. Thankfully, I am still able to count and could figure this out as I knit so it’s all good in the end. I will write to the designer and see why this hasn’t been corrected since the pattern’s been out for several years!

Happy Saturday to anyone who reads this!