I have finished these adorable little pumpkins and I love them! I found a few skeins of Lion Brand Thick and Quick in my stash and, you all know, that I’ve been working hard to knit down my stash. Many of the yarns that I have are nearly antiques! (Some are legit antiques but that’s another story.)

I have knitted this pattern before. It’s “Pumpkin” by Marnie Ann Joyce and it’s free on Ravelry. I’ve made these little pumpkins in super bulky and worsted weight yarns before. So when I found the leftovers of orange and green Lion Brand Yarns Thick and Quick, I knew what I needed to do – and the timing is so right on! Right?

I used US 10 1/2 DPNs for this project which made them a little smaller than previous versions but they’re perfect this way because none of the stuffing shows through and they’re pretty indestructible … and since they’re going west to my nieces and nephew, they’ll be bounced around a little bit (or a lot!)

These guys knit up in a flash. I was able to finish one in about two hours. I added the icord stem by knitting a 5-stitch icord for two or three rounds, and then decreasing to a 4-stitch icord for a couple of rounds and ended up with a 3-stitch icord until I thought it was the way I liked it. The green pumpkin has a special curved stem that has two stitches (one leg of each stitch) knitted together to stick them that way forever!

You may or may not know that I am a “clinic assistant” at our local elementary school. I am the “school nurse” paid on a lower pay scale and not a real nurse. I love the job most of the time and I adore working with the little germy kids. It’s very fulfilling … part mom (boo-boo kisser and ice pack provider) and part therapist (talking to kids with headaches and sore tummies really works miracles) and part EMT … I’m trained in first aid, and AED/CPR. So, if any of the adults decide to keel over on us during the school day, it’s me who is on the front lines. I hope I never have to use my training.

I came home from my summer in Maine at the beginning of August with several projects in tow. I left several in Maine to come home with my better half when he drives home. I’ve finished quite a few and have been putting off a couple, too. (I seem to want to ignore the color work projects – fingerless mitt and lobster had.) Instead, I’ve started several little projects that have been really fun. One of those is these cute little pumpkins. 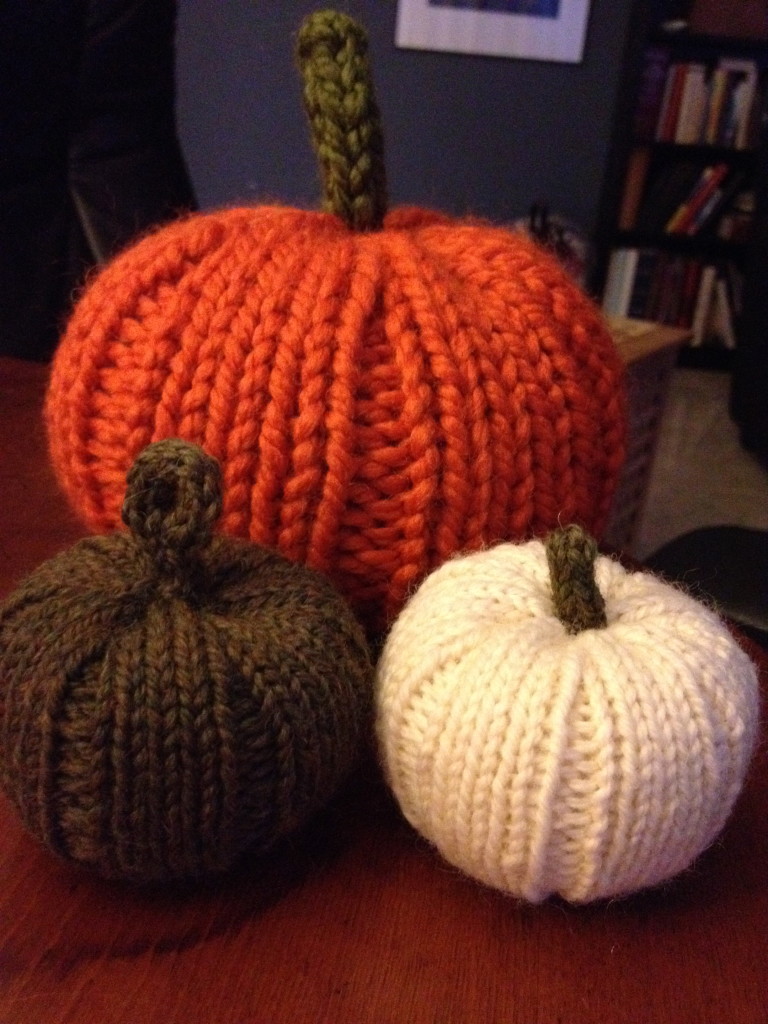 The pattern is a free pattern that I found because my new son-in-law wanted to know if I could make them a trio of pumpkins. Click here to be transported magically to the website with the pattern! What I love about this pattern is that it is very simple (and mindless) and good for watching TV knitting. You can use any weight of yarn and appropriate needles and get several sizes of pumpkins … I used a Wool Ease super bulky yarn for the biggest pumpkin. The smaller ones were knit with worsted weight wool (Patons Classic Wool). I like the i-cord stems, too … and had some fun making them all a little bit different.

I have since made one more large pumpkin for my clinic (the kids will love it!) and have started a trio for my Chicago daughter. I hope she doesn’t read my blog … that’ll ruin the surprise. Totally.

I planned to do nothing today. It was a bit grey and dreary … a lazy kind of Sunday.

I woke up late, had my coffee (soon it will be tea in the morning and no coffee but that’s a whole other story) and a rather sad looking pumpkin scone with the texture of a muffin, really. Then went outside because N. was going to mow the lawn … and I decided to weed the little perennial garden that we added by the big rock outside the front door. During the month of August, it went to heck and really needed some TLC!

We’ve been collecting the bits and pieces of scrap metal left behind by the railroad workers who’ve been upgrading the train tracks behind the house. And I decided that my garden needed to be edged with railroad spikes. I love it – and it’s so appropriate for this house that is so close to the tracks! (And we’ve still got a bucket and then some of pieces of metal for N. to practice soldering with!) A little bit of mulch and it will be done. Yippee! What do you think?

After doing nothing this morning, I made a pumpkin pie. I thought I bought a can of pumpkin but it was organic pumpkin pie filling … and the recipe on the back of the can didn’t ask for any sugar so the pie needs a bit more sugar but it’s OK with some homemade coconut ice cream on the side!

We took the dogs for a walk down the street and chatted with neighbors and then I got to sit and knit a bit with a lovely cup of tea on the side porch.

So, for having planned to do nothing done today, I feel like I accomplished a little bit!

PS – We have been working on repainting the front screen door and the fence that surrounds the garbage cans. Though we didn’t do any painting today, we nearly have it done and it looks so much better! Now, on to the back of the house (or the wood shed or the bedroom door and window or …) Here’s the “before” … “after” pictures when we’re completely done! 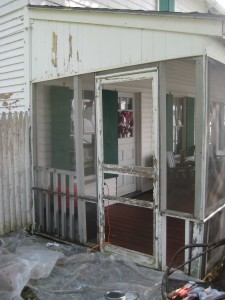