So, I’ve finished the lovely cowl … with my yummy soft Malabrigo angora in a buttery yellow (very bee pleasing) colorway. I went to my local JoAnn Fabrics store the other day – with my cowl – and picked out a few buttons.

The first two are an organic shape and a dark wood. Smooth and simple, providing a striking contrast to the uniform, almost architectural feel of the cowl itself. I love these buttons and I think they are my favorite (which is why I put them at the top of the “list”. 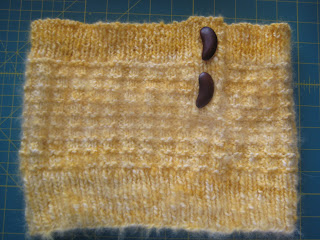 The second pair are round wood, with a swirl pattern in light and dark. Also a contrast to the linear cowl design. Like the buttons but not sure about matching them with this project. 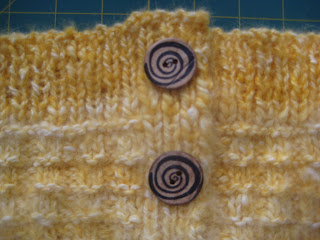 The third pair are Celtic knots in a metal finish. (Did I ever tell you how much I love Celtic knots? Aran knits? LOL!) I like these but they don’t pop like I’d like them to. 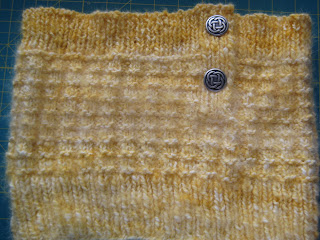 The last pair are hippie-dippy-color-popping-pink-with-peace-signs. I have to admit, I didn’t think I’d use these buttons on this project. I thought about my actor daughter when I saw them. She just was in HAIR on Broadway and briefly with the Tour and they just reminded me of her. I think I’ll save them for something for Kate. 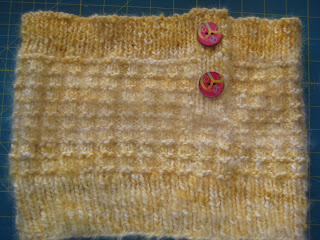 And then I go and get creative and the last two ideas are a combination of two buttons together … the most contrasty ones, as a matter of fact. I think I like the next one. It reminds me of an exclamation point! (And I like using exclamation points … have you noticed? 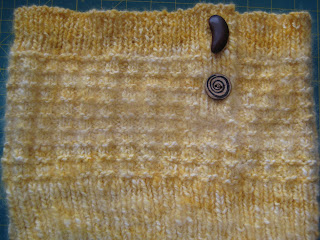 This one leaves me unmoved. Why is it that the one above I like while this one is so close but leaves me totally unexcited? Very strange how that happens with buttons. 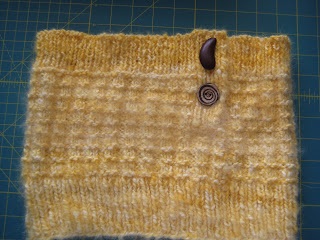 So, which buttons would you choose? Did you pick the ones that I picked? When I get them sewn on, I’ll get a photo taken of the finished (and buttoned up) cowl … wrapped around my Florida neck. Yes, I’ll do that for you, dear blog readers! But I won’t have it on for very long … at least not here!
Off I go to knit!

2 thoughts on “What a Difference A Button Makes”