I have hit my frustration point. 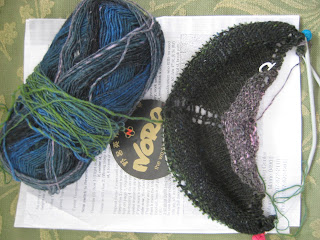 Two projects are getting the better of me and (fortunately or unfortunately) I’m so stubborn that I keep frogging and starting again. I bought some Noro sock yarn and got a free pattern up in Maine last summer. The sample shawl that was in the store was so cute! As I got going with the pattern, nothing was right. I didn’t like my needles (old plastic ones) and I didn’t like the yarn (too sticky, but could have been the needles) and didn’t like the pattern (reverse stockinette stitch, you’ve got to be kidding!) I’ve frogged it now twice and have started it the third time with the same needles, yarn and pattern and maybe this time I’ve got it right. We’ll see! 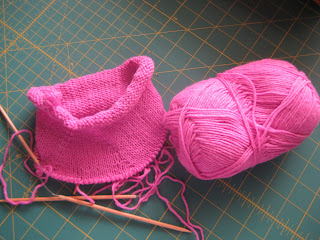 And then I’m having a problem with re-knitting the Senorita Lolita sweater. I started it twice with some beautiful alpaca yarn that I bought at an alpaca farm visit. My Tuesday night knitting group went on a field trip to Southern Oaks Alpacas (Here’s a link to their Web site!) The first iteration was not working the way I wanted it to because I wanted to make a couple of simple changes. So, I frogged it and restarted it and frogged it again. After a couple of days, I decided to use some old pink sock yarn to mess with the pattern changes. So far (despite the fact that I can’t count!) it’s going better and I’ve made it up to the legs part … and we’ll see how the next section knits up! I so love the first iteration of the Senorita Lolita sweater and I really want to be happy with the second one – and I’ll never design another garment without taking copious notes and writing it down!

I’ve decided this frustration must have something to do with the alignment of the moon and the stars … or maybe it’s simply the crummy needles. I guess I have to do some more shopping!